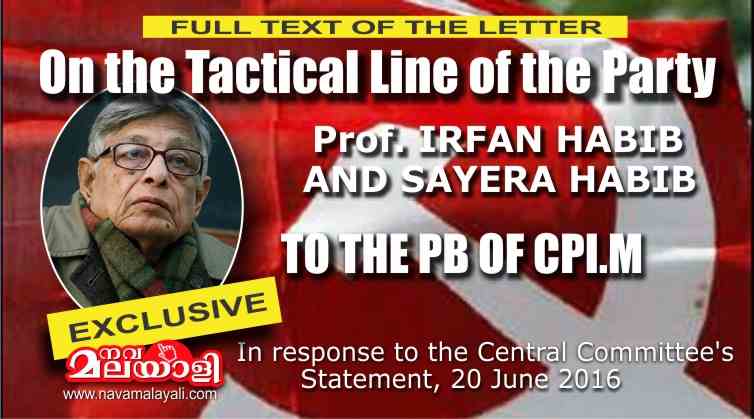 A NOTE By Prof. IRFAN HABIB AND SAYERA HABIB TO THE PB OF CPI.M In response to the Central Committee’s Statement, 20 June 2016
The Statement issued by the Central Committee after its deliberations on 18-20 June 2016 deals item-wise with various issues without going into what are the essential features of the present situation in the country and thus fails to offer a tactical line appropriate to that situation.

The CC statement, while criticising the BJP Government, omits to underline the fact that this government at the centre is not just another parliamentary government of a bourgeois party, but represents a regime which openly acclaims the semi-fascist ideology of the RSS, is unconditionally committed to meeting all the demands of the top elements of the corporate sector, Indian and foreign, and is continuously undermining, in the most naked fashion (through saffronzing education, raising new communal issues, etc.) the secular basis of our nation. It is trying to seize power in state after state either through unconstitutional intervention (Arunachal, failed attempt in Uttarkhand); or, as in the case of Assam, by invoking extremes of chauvinism and communalism. In other words, the major task today of all democratic forces, including the CPI (M), should be to offer firm united resistance to the BJP’s offensive and its attempt to seize total power.

The primary object of our Party should, therefore, surely be to isolate the BJP as far as possible, and form a broad united front with all other democratic forces so as to foil the BJP’s plan of gaining control over the states still outside its orbit, and finally, to secure its defeat at the parliamentary elections due in 2019.

Unfortunately, our Party’s official tactical line is the reverse of it. In Bihar in 2015 we only united with CPI(ML), besides CPI, and rejected any understanding with the JD(U) – RJD -Congress alliance. The result was that in the elections the Party failed to get a single seat, while the BJP was defeated in a popular wave against it, from which we had simply opted out. We welcomed the outcome, but the CC never squarely faced the fact that our entire tactical line was dangerously mistaken, and could have fatally divided the anti-BJP vote.

In West Bengal, had we failed to work out an accommodation with the Congress, our defeat would have been much severer under the Trinamool’s onslaught, our Party and its members would have suffered still greater attacks, and we would have made the BJP the main opposition party. Our fault was surely that we did not work out in time a common programme with the Congress to present before the people of West Bengal a real alternative to the Trinamool regime.  Tamilnadu is another example where our policy of a front only with “left” and obscure parties has landed us in a situation where we have had nothing to show for our effort. Would it not have been better to have had adjustments with the DMK-Congress alliance? The CC’s failure to draw any lesson from our experience in Tamilnadu, where the official ‘tactical line’ has been religiously followed, is, again, unfortunate.

In Assam too we followed the official tactical line, rejected the Congress’ open invitation for electoral adjustments, and thus contributed our small bit to split the anit-BJP vote. The CC’s statement that the Party asked voters “to oust the Congress from power” in Assam is rather disquieting, since it should have been foreseen that the result would be to bring BJP to power there, as the Left by itself was in no position to even win a single seat, let alone offer an alternative to the Congress.

In Kerala the victory of the Left and Democratic Front, led by our Party, is the lone bright star for us in the recent elections. But the CC’s equation of “the BJP and Congress” as our principal opponents in Kerala is unfortunate. We must be ready to build a movement against the RSS in Kerala, which could include other non-communal politicians and supporters as well. We must surely not allow legitimate electoral considerations in Kerala to bar cooperation with the UDF components and others in the struggle against the BJP and the RSS.

The Central Committee and the Politburo should consider seriously the issue of the tactical line and not just invoke the technicality of the decisions taken at the last Party Congress for following a policy which has neither reason nor experience to justify it. Lohia-like “anti-Congressism” will not serve us very much. Indeed, there has arisen in this country already, as we saw in Bihar, a revulsion against the BJP’s aims and actions among many democratic elements and secular parties. We have to decide whether we can stand aside from joining this movement, just because of the inclusion within it of the Congress party, which is still the principal opposition party at the national level. Incidentally, it cannot be anyone’s position that the Party should refrain from opposing the Congress on issues on which we differ or accept alliance with it everywhere whatever its terms.

What has been said above should not be taken to mean that building our Party and its mass organisations is not an important task as well. But mere calls for Party-building “through class and mass struggles” in Tamilnadu and Assam and presumably elsewhere (CC’s statement) are not enough. Ideological education and organisational effort are necessary, but these too would be really successful when our Party has a tactical line which can appeal to the largest possible sections of our people. A sectarian approach towards other secular mainstream parties is not going to win us much ground among ordinary people.

Indeed, we must also realise that the Party cannot be built up in a position of isolation. Even building a trade union requires not only the support of factory workers concerned, but also sympathy of people outside. The Party would invite sympathisers to its cause once they know it has some immediate means of bringing relief to people; and this only the perspective of a broad united front can provide. Experience throughout the world has shown that building a united front is essential to genuine growth of the Party. After all, the Communist Party in India grew most when it regarded itself as a militant detachment of the National Movement in the late 1930s and 1940s: Surely, we must learn from the Dutt-Bradley theses, which the Party has always acclaimed.

We hope that as Party members for more than 60 years our views would receive due consideration from the PB and CC.