India wants a permanent seat on the UN Security Council!  Our glorious leader seeks the support of the two nations,… 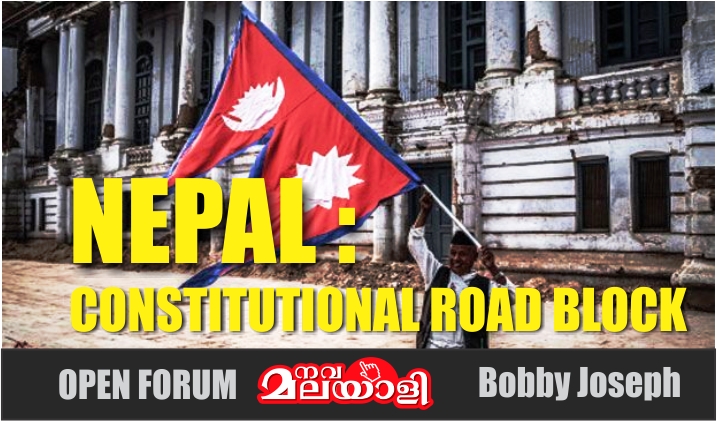 India wants a permanent seat on the UN Security Council!  Our glorious leader seeks the support of the two nations, whose ferocious actions of committing genocide against millions whilst also slaughtering hundred of thousands of Indians during WW II, brought the very UN into existence! Germany and Japan! Oh and India in turn would vote for them both! The irony alone is worth the permanent seat!

However I digress before I have even started, as this rant is about our neighbor, the “Hilly Kingdom” or what was until recently the last “Hindu Kingdom”!

I have to confess that I am one of those who have been reading what has been passing for news from way before the Internet when we were still writing on slates!

With the advent of the Internet I have acute withdrawals without my hourly fix of ‘news’ from the likes of Goswallomi and Barkanutt !! On account of this I am up to speed on lots of shite that I have no control over or dealings with!

Take Nepal for instance! It has been common knowledge to the average news junkie like me that the hilly-billy’s in Nepal were fixing the constitution so the screwed stayed screwed! Even I knew that Sept 20th was D Day for the signing of the Nepal  Constitution!! 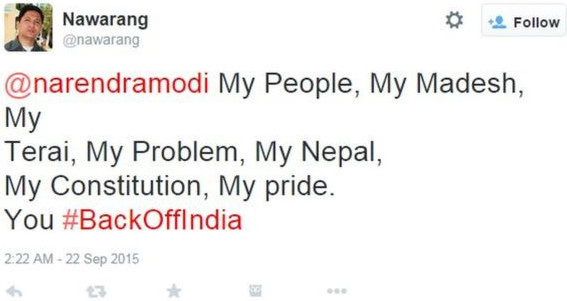 Modiji, you may have noticed is very socially networked and posts everyday whilst also getting out and about a lot these days !! However he  was completely clueless about the Nepal situation till the #Nepalwehaveourownconstitution was trending much more than Modiji’s latest on #HanumansAerodynamics the key to the next generation of HAL fighter aircraft and engine design !! The whispers are that thousands of monkeys have been drafted into help with the R&D!!

Only last year did our exalted leader promise Nepal help worth One Billion USD in aid! Oh and didn’t all our chests just fill up with pride and make us want to do a Suryanamaskar and sing Jana gana mana…!!

More recently after the horrible earthquake in Nepal, and our own fourth estates even more grotesque reporting of that tragedy, showing us all clearly the dangers of giving monkeys iPads, TV cameras and Microphones, did our very own Modiji send in the cavalry to help with disaster relief, which was turned into a circus by our nimrod journos along with our military transport looking for photo ops, which resulted in an entire nation numb with grief telling our Journos to fuck off back to Bharat!

So in spite of our proximity and our sophisticated intelligence services India was unaware of the fine print in the constitution where the fix was on!! The constitution in Nepal by the way is seen as a stitch up as there was very little consultation done, that among other things, creates a federal seven province scenario that just happens to slash the boundaries through the middle of age old communities. The new and arbitrary boundaries is expected to both separate and dilute even further the power of long marginalised and disenfranchised, BJP friendly Madhesi community that live on Nepal’s borders with the Indian states of Uttar Pradesh (UP) and Bihar! The Govt of India we are assured has absolutely no bias towards any particular Hindu community and no comment on any of the constitutional issues not because our experts were asleep at the wheel and out to lunch. Oh no never, on the contrary it is because we never ever interfere in the governance of other nations!!

In fact I have it on good authority and personal experience that on a good day we hardly ever interfere in the governance of our own nation!!

So how did all this happen without the all knowing one, knowing all, or at least some of it!

Did Sushmaji and her minions at the Ministry of External Affairs (MEA) miss a meeting, or was Sushmaji a little preoccupied with that other Modi, Lalit!

Were Ajit and his spooks at the National Security Agency (NSA) glued to their ops room monitors overseeing the counterinsurgency into Mynamar, or were they watching the latest Sunny Leone jingle

Word is, that’s the best way to get the exalted one’s attention as he is an early riser and late sleeper because he is very very busy worrying about what to wear to his shortly to be announced Visit to the Vatican to meet the Pope, where our Glorious leader is expected to reveal that Christ escaped to Kashmir, converted to Hinduism to avoid getting crucified, a second time, as it was all a bit tedious not to mention extremely painful !! The Pope for his part has promised that on the day of the visit, one whole dish on the canteen menu at the Vatican will not have any beef or dairy products! Pork, Lamb and any other four legged knuckle draggers will be fair game, so Baba Ramdev has decided to not be part of the PM’s delegation!!

Anyway asannahs, mislaid files, missing memos, and a facebook/twiiter communiqué breakdown, aside, here we are into week two of a blockade of all goods from India to Nepal that the Govt of India is definitely not stopping, on account of a secular majoritarian constitution having been adopted by the Nepalese Government on the 20th of September, around the time the great leader was saying on his Maan Ki Baat that “,Mahatma Gandhi had said that if I have to choose between cleanliness and independence as a priority, I would choose cleanliness. We too should follow him.”!! Ah we can all rest easy now about toilets for India, but in Nepal the shite had hit the fan as our farsighted government woke up to the fact that the constitution was on the statute books and decided that it was time to not show that we are miffed !!

An Oct 7th leak from the Intelligence Bureau (IB) suggests they have send a report to the PMO, MEA and the NSA stating there is a growing anti-India sentiment in Nepal and that there is  a strong view in Nepal that the Madhesi protests blockading the convoys are fuelled by India.

We cannot be sure if it was twittered to make sure that Modiji is now clued up!

Not that anybody gives a shit!