My Mom had been gnawing on my skull relentlessly, so wishing for a bit of peace and to make her… 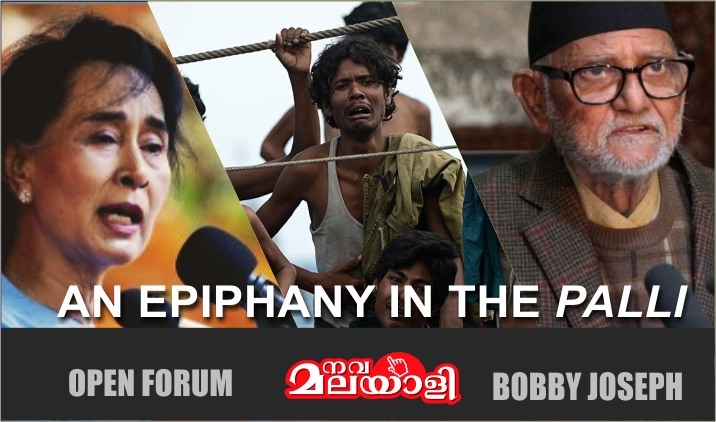 My Mom had been gnawing on my skull relentlessly, so wishing for a bit of peace and to make her happy, I went to Palli today!! I spend three hours going through the sitting down and standing up motions, whilst listening to the cars outside with huge loudspeakers blaring out slogans for the UDF, the LDF, and the other F, for the coming panchayat elections, while around all were in a state of grace!!!
Then it came to me!!
I had “An Epiphany in the Palli”!!

There are moments when we are wary of someone or something but cannot quite put our finger on why!! It’s an instinct! On one such occasion in 1992, shortly after I had finished producing and editing a Children’s book on Mandela, for a publishing house in the UK, I was asked by the same publishers to do a book on a well known political dissident, who was all the rage in the west at that time!! This person had been incarcerated for a long time, and was taking a principled stand against fascists, and yet I was reluctant. Some instinct stopped me from taking the task

Amidst the growing clamour of an Icon being manufactured I was wary but silent! I must now atone for my silence then!!

Received wisdom and orthodoxy can sometimes plague the best of people, where a culture of dissent is neutered, by both peer pressure and the din and excitement of hope in a dark place! That hope can be so blindingly sanctimonious, it drowns it’s surroundings in a sycophantic fervour! A lot later after much fanfare, accolades and terrible damage has been done, we wise up to an “oh shit” moment of awareness !! History is one long account of “oh shit” moments! We are forever remembering and forgetting, before the next “oh shit” moment is upon us !!

In a not so faraway and forgotten land, people are pretending that a democratic process is about to take place !! I say pretending quite deliberately! For it cannot be anything but that, if the major parties will not field candidates of a different race or religion!

Quite simply that’s Apartheid! It’s what the Zionists do! I could also say it’s what the Wahabis retards would do if they ever got around to an election, but there is no danger of that from the keepers of the house of Ibrahim, as they are still looking for their fucking thumbs with their head up their theocratic orifices !!

So back to that person whose story I was not prepared to produce and edit a children’s book on.

Allow me to digress!!

The Nobel Prize hit a remarkable low point, the day they gave one to Menachem Begin! Remember him! The fucking weasel! He fitted the bill

for the stereotype Zionist terrorist !! Still he looks good next to PschyoBibi the genocidal dim wit fuck !! At least Begin did receive that sellout Sadat in Israel and did reciprocate by going to Egypt !! Of course as was expected  it turned out to be an “oh shit moment” for the Palestinians,the Egyptians and the Israelis, and remains so to this day!

In fact the Nobel Peace Price has gotten a lot worse since then as they have given it to Kissinger, and then to De Klerk jointly with Mandela!! That’s  a whole load of “ohhhh shhhiitttt” moments right there !!

The Nobel Laureate I spoke of before I digressed, leads one of the major political parties that has not fielded a single candidate from a minority community merely because they are of a particulate religion and race !! In fact accusations that the party and this leader were too close to that particular religious and cultural minority had got this leader miffed !!

I mean how dare they suggest that the party is close to this religious minority, particularly since not a single person of that religious minority is standing as a candidate, for the Nobel Laureates party, in the upcoming miming of democracy!!

Completely oblivious to the rituals in the palli I wondered what the Dalai Lama’s thoughts were on “Ma Ba Tha”!!

The Ma Ba Tha is led by one Ashwin Wirathu a Buddhist Monk famous for quotes like “You can be full of kindness and love, but you cannot sleep next to a mad dog,” referring to a minority community in that land !!

He would be at home in the BJP, but for the fact that he ain’t “injun of the Bharat people “, so the not so forgotten far away land that will fake a democratic orgasm, is stuck with him!!

The Ma Ba Tha do not like the Nobel Laureate who needless to say has not taken any offence to that!!!

Oh No!! In fact the Nobel Laureate will campaign for three days in towns where support is the strongest, but will skip the northern part, which is home to more than 100,000 of the marginalised minority!

They are the Rohingyas!! Mostly Muslims of Bengali descent!!

In recent years, more than 200 people have been killed by the Buddhists, mostly Rohingyas, . Another 140,000 have been forced to flee their homes, and now live in squalid camps, denied citizenship on grounds of being foreigners even though they have lived there for generations!

Oh and if that was not enough, in February this year Yanghee Lee, the UN’s special rapporteur had highlighted this discrimination against them, She criticised laws proposed by nationalist Buddhist monks that include curbs on inter faith marriage and religious conversions.

After her visit, she was described as a “bitch” and a “whore” by none other Ashwin Wirathu of Ma Ba Tha !!

The Generals who decide who gets to party and who doesn’t, have stacked the deck so our esteemed Nobel Laureate cannot be president, because the icon of hope was marriage to a Brit !!

Through all this our Nobel Laureate has stayed studiously quiet with not a peep on the killing, the bigotry, the ethnic cleansing and the gerrymandering !!

The Road to Mandalay maybe paved with best intentions, but it’s caretakers include a bunch of rabid retards led by a fuckwit Buddhist Monk !

I feel vindicated for not producing a children’s book on Aung Sang Suu Kyi !!

Oh on a happier note news flash just in -Tankers with Chinese fuel has arrived in Nepal to see off the blockade by India!
http://asia.nikkei.com/Business/AC/China-deal-ends-an-Indian-monopoly-in-Nepal

I think the Government of Bharat just got kicked in the goolies, by the Nepalese Government and the Chinese government!! As an old friend of mine told me once “never trust a commie” !!

Oh and I am more than willing to produce and edit a children’s book on the current President of Nepal Bidhya Devi Bhandari !!

Not so Ache Din for Dingbats !!

As for me I made Mom happy, and had an Epiphany in the Palli !!