Back in February of 1997, in a series of interviews with David Barsamian and recorded at Harvard, in Cambridge, MA,… 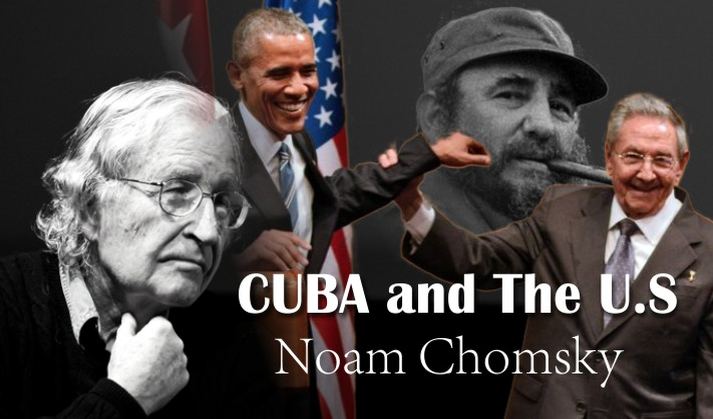 Back in February of 1997, in a series of interviews with David Barsamian and recorded at Harvard, in Cambridge, MA, Noam Chomsky spoke on “Propaganda and the Control of the Public Mind”. This particular one is on Cuba. It’s a narrative that you’ll be hard pressed to find in the main stream media and the establishment. Beyond the shrill, jingoistic nonsense that’s been peddled to all and sundry, most Americans, are simply unaware of the basic history of our relationship with Cuba, not even on a rudimentary level.  In light of the new rapprochement, we found it so prescient on the re-read, and quite apt for our times. Chomsky is at one of his funny and acerbic best!
Published with consent from David Barsamian, Alternative Radio.
Coordinated by Navamalayali Editor Americas, Jake Joseph
To read the translated version in malayalam please click here.

David Barsamian: Most of the countries in the world have normal bilateral relations with Cuba. Why is the U.S. virtually alone in its hostility toward Cuba? What explains U.S. policy?

Noam Chomsky: Let me just report again some truisms that you would read all over the front pages of the newspapers if there was any commitment to trying to tell important and uncontroversial truths. There’s nothing I’m going to say that’s in the least controversial. But let’s run through the history, because it’s interesting.

Cuba was the first foreign policy problem for the U.S. It goes back to the 1820s. This is no new thing. Back in the 1820s the nice guys, like Thomas Jefferson, who were planning to take over the hemisphere, saw Cuba as the next place to pick up. They’d already stolen Florida from its inhabitants, claiming to have taken it from the Spanish, but actually from its inhabitants, and their eyes were now moving toward the West but also on Cuba. That was the next prize.

There was a little problem: the British fleet. There was a British deterrent, just as in the 1960s there was a Soviet deterrent. The British were the hated enemy in those days, mainly because of their power. They were preventing the U.S. from expanding, like they prevented the U.S. from conquering Canada a couple of times, which the U.S. had been trying to do since 1775 and may have finally achieved in the so-called free trade agreement. Cuba was sitting right there, a valuable place. You couldn’t get there because the British were in the way. John Quincy Adams suggested that we just be patient. He said it will drop into our hands like a ripe fruit by the laws of political gravitation, meaning by the time we get stronger and the British get weaker, things will shift around and we’ll be able to take it over.

By the end of the century that had happened. The British were being pushed out of the game. The U.S. was getting more powerful. During something that is ludicrously mistitled the Spanish-American War, the U.S. intervened in Cuba primarily to prevent it from liberating itself from Spain. You take a close look. That’s an interpretation. Don’t take my word for it. But I think if you look you’ll find that what happened is that the intervention in Cuba was primarily an effort to make sure that its liberation from Spain didn’t mean liberation. Cuba was quickly turned into an American plantation, with restrictions on its options, bought up by American agribusiness.

When Cuba tried any funny ideas about moving towards independence, it was smashed down. For example, Franklin Roosevelt is famous for the good neighbor policy. We don’t intervene any more in the affairs of our neighbors. Take a look at 1934, when Cuba made the mistake of trying to elect a moderate social democrat with more or less independent ideas as President. That’s going too far. Uh Uh!! Out. So it continues up through 1959.

In 1959 Castro comes along. There was a little bit of toying with the question of whether we can maintain the new Cuba in our system or not. This is not a new policy issue. Remember it goes back to the 1820s and hasn’t changed much. Within a couple of months it was decided that Castro’s too big for his britches. There are no Russians. He’s anti-communist. He’s jailing members of the Communist Party. There’s no question of the Russians or the communists. By late 1959, U.S. planes were already bombing Cuba from Florida bases. The State Department claims they didn’t know about it. Sure. Okay. But try that if, say, Cuban planes bomb the U.S. and say, The Cubans didn’t know about it. But it happened.
” Cuba has been subjected to extensive international terrorism, economic strangulation, without an end.”

In March 1960 the Eisenhower Administration made a formal decision. It was secret, but now it’s declassified, so you can find out about it. They made the formal decision to overthrow the Cuban government and take over. March 1960. Remember. No Cold War. No Russians. No Communists. Just independent Cuba. From that point on, up until today, Cuba has been subjected to extensive international terrorism, economic strangulation, without an end. And it’s not trivial stuff. Just to give you one small example. This one comes from an absolutely impeccable source, Raymond Garthoff, who is a very conservative and respected historian, right inside the CIA intelligence apparatus, now writes historical work on all this stuff. Take a look at his book Reflections on the Missile Crisis, which he’s writing partially from the inside, partially as a historian. There’s a little item in there somewhere where at the peak of the missile crisis, when it had sort of theoretically been solved but it still was not over, like the missiles were still there, one of the Mongoose teams, these terrorist teams that Kennedy had sent into Cuba to smash the place up, which was apparently acting out of control at the time, there’s no evidence that Kennedy had ordered it to do this, so maybe it was on its own, but one of them blew up a petrochemical plant in Cuba, which according to him, he doesn’t verify it, but he says it’s alleged and apparently takes it seriously, four hundred workers were killed. Suppose Cuba blew up a factory in the U.S. and four hundred people were killed. Think it might make the newspapers? We’d probably nuke them. But this is us.

This is incidentally one tiny footnote to a long history of terrorism. This was right at the peak of the missile crisis, when for all I know Cuba had its fingers on the missiles. I don’t know that. But somebody did. For those of you who want to know about why people believe what they do, do a little check and see how much information you can find out about this. I’ll save you the trouble. This is it. I’ve repeated it probably twenty times in books that nobody would dream of looking at or reviewing. But that’s one little item. It goes on to poisoning crops and livestock and shooting down fishing boats and strafing hotels and blowing up airplanes. Meanwhile, the economic strangulation goes on. Permanently.

For a long time there was a pretense that we’ve got to do this because of the Russians. Because Cuba is a tentacle of the Russian monster trying to strangle us. In an intellectually free country, everybody would laugh. In fact, when Kennedy once tried to get the Mexican ambassador to join in some anti-Cuban action back in the early 1960s, the Mexican ambassador actually told him he’d like to do it, but if he announces it in public in Mexico that Cuba’s a threat, he said, forty million Mexicans will die laughing. And that’s basically true.

The idea that Cuba could be a threat even if it’s armed by the Russians, I can’t even think of a counterpart, but suppose that before the end of the Cold War Russia had been carrying out massive terrorism against Denmark and strangling the country. Let’s imagine it could do that. Because it said Denmark was a threat. Denmark was way more of a threat to Russia than Cuba is to the U.S. Denmark is an advanced industrial country. It’s a member of a hostile military alliance, well armed. If the Russians had said that, you wouldn’t laugh. It would be a sign of their lunacy. But we say that all the time and that’s okay, because that’s us. We’re properly indoctrinated.

To judge how much of a Russian threat it was, bear in mind that the formal decision to overthrow the government was taken in March 1960, when there were no Russians. It continues under the pretext of a Russian threat as long as the Russians were around. What happened when the Russians disappeared? November 1989. The Berlin Wall falls. No more Russians. What happened to Cuba? If the story of the last thirty years that we hear from Arthur Schlesinger was true, we should have welcomed Cuba with open arms. No more tentacles of the Russians. Did it happen? No. We drew the noose tighter. All of a sudden it wasn’t because the Russians were a threat, it was because we loved democracy so much, as you can easily demonstrate by looking at what we do around the world. If you take a look at the educated classes, they didn’t skip a beat. From one day to the next it’s defending ourselves against the Russian threat to loving democracy. With this history out in the open. That’s a real achievement. I doubt that a totalitarian state could achieve anything like that.

Up until now it’s, We love democracy so much. Then the only question is, What’s the best way to achieve democracy? Is it the Helms-Burton Act or by the Canadian Prime Minister going there? This is discussed as if it were serious. That’s the interesting part. It’s not forty million Mexicans die laughing, which it ought to be. It’s discussed as if it could conceivably be serious. It can’t possibly be serious. The only question is how to make sure that Cuba will go back into the box in which it was supposed to be put in 1820. If they can force it back there by one or another means, fine. We’ll accept Cuba. We can call it democracy, even if it’s run by some brutal murderer. Like we call Mexico a democracy. We call Colombia a democracy, in fact, the best democracy in the hemisphere. It even has an independent political party, which was allowed to function in 1985. Since that time about 3,000 of its activists have been murdered, mostly by security forces and paramilitary forces, including every presidential candidate and most of the mayors, but it’s there. It’s got to be a democracy. And since we love democracy so much, we think it’s fine. So maybe if Cuba ends up a democracy like that, it’ll be fine, as long as it follows orders.

There ought to be a hundred million Americans who would die laughing over this, and the fact that they’re not is an indication of the grip of the doctrinal system, which is really powerful, and in this case primarily among the more educated sectors. If they don’t know these things, it’s a conscious decision not to know. It takes work not to know these things. You don’t have to really explore.